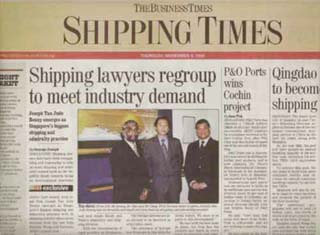 The exodus was led by KWP’s head of shipping Danny Chua and included his deputy at KWP Timothy Tan and Mohamed Goush Marikan, a former merchant navy officer.

It was not too long ago when another local legal firm with a shipping practice, Drew and Napier, lost its top shipping lawyer Steven Chong to Rajah and Tann. Mr Chong, a senior Counsel, is regarded as the doyen of Singapore’s shipping lawyers and now heads Rajah and Tann’s admiralty and shipping division.

With the liberalisation of legal practice in Singapore, more foreign legal firms have been allowed in with an offshore licence to operate here. They however cannot practise as advocates and solicitors in the Singapore courts.

Several foreign law firms that specialise in shipping and maritime like Holman, Fenwick and Willan, Ince and Co and Clyde and Co have established themselves here and traditionally represent British shipowners, cargo owners and insurers.

The foreign lawyers are also allowed to be involved in arbitration cases.

The presence of foreign law firms are in line with the government’s call for one-stop legal services in offshore and local law although it made the call with an eye towards alliances between local and international firms.

Commenting on Joseph Tan Jude Benny’s expansion, its founding partner Jude Benny told Shipping Times yesterday: “Singapore has a real chance to become a major centre for shipping litigation and dispute resolution in matters of collision and environmental damage control in international waters. We want to be party to this development.”

He said with the new team in place, the firm has the breadth and depth at every level in shipping and admiralty practice.

Joseph Tan Jude Benny were involved in two significant maritime cases of international interest. The firm acted for the Cousteau Society and their underwriters when The Calypso, the vessel with which Jacques Cousteau explored the maritime frontiers of the world, sank in Singapore in 1996. They also represented Bethlehem Shipyard concerning the delivery of the John Brewer, the world’s first floating hotel, to Australia’s Great Barrier Reef.