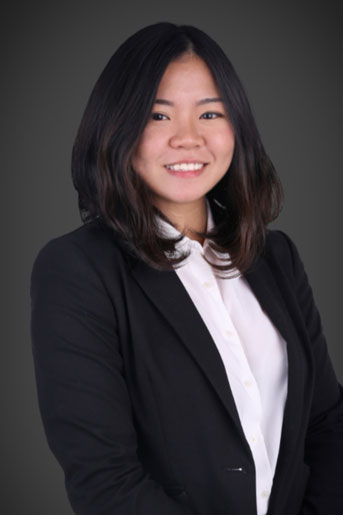 Jolene has experience with commercial dispute resolution and is part of the shipping and admiralty team at JTJB in which she routinely acts for and advises various stakeholders in charterparty, cargo and crew disputes.

She has experience acting for commodities companies in matters involving trade financing, with a notable case acting for a state-owned oil and gas company in defending a cargo misdelivery claim brought by a financing bank with a claim value of over US$65 million. Jolene has also advised and acted for judicial managers and liquidators of Xihe Holdings on various shipping matters involving almost 100 vessels, following the collapse of Hin Leong Trading and Ocean Tankers (Pte) Ltd.

While at JTJB, Jolene has also been involved in several shipping arbitration matters, which included a multi-million dollar claim brought by a company for an alleged breach of an irrevocable agency agreement.

She has also advised and acted for both creditors and distressed companies in restructuring matters, including advising on creditors’ claims, priorities between competing creditors, and the proposed restructuring options put forward to creditors.

Prior to joining JTJB, Jolene’s key areas of work were commercial and general litigation, in which she acted for a well-known social club in various membership and employment disputes and on behalf of companies against directors for breaches of fiduciary duties. She has also acted for clients in a range of matters under the Protection from Harassment Act, divorce and probate, and criminal matters.