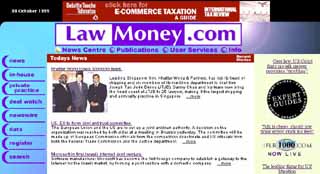 This story was posted on the LawMoney website on 7 October 1999.
Khattar Wong loses Shipping team

Leading Singapore firm, Khattar Wong & Partners, has lost its head of shipping and six members of its maritime department to rival firm Joseph Tan Jude Benny (JTJB). Danny Chua and his team now bring the head count at JTJB to 25 lawyers, making it the largest shipping and admiralty practice in Singapore.

Founding partner of JTJB, Jude Benny, is delighted with his acquisition, having courted the services of Chua for some two years. Benny is presently in London, visiting some of the firm’s protection and indemnity club clients. He says: “The union has been extremely well received here by the clubs and we are very pleased with that. Danny and his team can help our ability to deliver and will open up new markets for us. It has given us a lot of in-depth strength at all levels of experience. On top of that, we’ve managed to secure the one and only dual-qualified Singaporean. That’s given us a tremendous boost. We now have a person who has got the technical qualifications to do a lot of the ‘wet’ salvage work and of course he’s also a qualified lawyer and a partner in the firm. That adds a dimension to the services we can give.”

Khattar Wong has responded to the departures by relocating senior partner, Yang Lih Shyng, from its China desk. Yang, a former partner at Rodyk & Davidson, has been in practice for 20 years and now heads the maritime practice. He says: “Danny’s departure is something that we feel is very much a loss. It was not something we wanted, but in no way does it mean that there will be no shipping department at Khattar Wong.”

Yang now heads a department of three partners and three associates. Former Drew & Napier partner, Sin Lye Kuen, joined the firm recently, and more acquisitions are sought. Yang says: “It just so happened that things came together at the right time. Sin Lye Kuen was somebody that we had been interested in for a long time. We are looking to employ another two or three associates and maybe one more partner.”

Yang remains bullish regarding possible client departures. He says: “For clients who are very active in shipping, it is quite understandable that they would want the lawyer who is handling it to continue to handle it. I don’t think that has happened. The move has been very amicably done with the clients interests foremost in mind.”

Chua was able to secure an early release from his contract at Khattar, and the whole team eventually moved together on September 24th. Yang explains: “They wanted to be released by a certain date. We said we would try to accommodate that as much as possible. And in the end that date was achieved. It required a great deal of cooperation and good will from both sides, but we remain friends.”

He and others have reservations as to how significant the move will be to the market however. Yang says: “I don’t think that all the 25 lawyers will be doing shipping. But with that number of lawyers, they will certainly be a major player. The question remains whether there is sufficient work to go around to justify having so many people dedicated to shipping.”

Benny is adamant that there is. He says: “I’ve never expanded on the basis of anticipation of work. We’ve always expanded because we actually need the people to do the work. So the work is certainly here, and from what I can see from my visits to London it would appear that I might even be a little shorthanded with 25 people.”

While JTJB is entrenched as a specialist shipping practice, it has to branch out to other areas. The firm is in negotiations with lawyers and law firms in Singapore and the region to expand its scope. To go, says Benny, “where no other shipping lawyers from Singapore have gone before”.